On September 20, 2018, a regular quarterly meeting of members of the Russian-German Chamber of Commerce in the Southern Federal district was held in Krasnodar in “Fratelli” restaurant.

The meeting was conducted on behalf of the Chairman of the Executive Board of Russian-German Chamber of Commerce Mr. Matthias Schepp and the Authorized Representative of the chamber of commerce in the Southern Federal District Mr. Ralf Bendisch.

The meeting consisted of two parts, the first, business one was devoted to the topic “Brand “Made in the Kuban” as an opportunity for export provided to the local producers with German capital”, the second part was Kuban wines tasting, being an initiative of “Fratelli” restaurant.

The meeting discussed topical economic and financial issues as well as further development outlook and strengthening of cooperation between German and Russian entities in the current complicated geopolitical environment.

MauerGroup company was represented at the meeting by Alexey Miroshnikov, Partner, Head of International Cooperation Department. 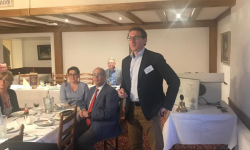